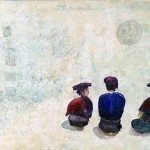 During the coffee break of an intercultural management training for expats in the Netherlands, Kamiko, a Japanese HR Manager, approached me; ‘I have been working in the Netherlands for seven months now. It has been a great experience so far. Thank you.’ There was more to come and rather than asking her directly I acknowledged her observation with a smile and allowed for a moment of silence. The other participants were off to catch a few rays of sun and nothing came between Kamiko, me and our silence. Then she continued: ‘I understand the way Dutch communicate and today you are helping me to understand why we use different words to express ourselves. I am trying to adapt, but my mind is often not aligned with my heart. And I’m often afraid the Dutch notice my reservation.” Kamiko had been clearly uncomfortable about the communication between her and her Dutch colleagues. She had been well-prepared; all travel guides for the Netherlands discuss the directness and bluntness in their speech. ‘Words are all we have,’ American writer Samuel Beckett once said. The Anglo Saxons, like the Dutch, are low-context speakers. What you hear is what you get. This is not so in many other cultures, including the Japanese.

In many cultures, people use high-context communication for a two key reasons. One reason is their sensitivity to social hierarchy, also described as the power-distance dimension in the Hofstede model for intercultural management. I experienced this firsthand during one of my first assignments as an expat country manager in Guatemala. I was welcomed very warmly into the company. My management approach was to allow the staff to take initiative, speak-up, focus on personal development etc. After a while I was bewildered with the lack of response. People worked hard, but they kept a distance from me (I wanted to be the facilitator rather than the boss). I soon found out, over a beer with one of the well-traveled seniors, that my staff had only one need. The need for me to be their boss, to be in charge, to provide clear instructions and to check on their progress. My ‘facilitator’ style made them insecure, although they would never show this, let alone tell me. Any feedback would be very reluctantly and indirect. From that point, I still encouraged employees to offer their suggestions, but I avoided leaving employees to manage their work themselves. Confiding in their ability to contact the boss if they would run into problems or have additional questions was clearly inefficient. In hierarchical cultures like Guatemala, people appreciate the boss paying interest in their work by checking it, even unnecessarily. In the egalitarian Netherlands there is a ‘no news is good news’ and ‘trust me, I can do it’ approach. ‘Problems? We tell you.’

Another key reason for a high context communication style is the social interdependency that a community has developed, also known as the individualism/collectivism dimension of the Hofstede model. In Sri Lanka I was once welcomed by our local representative who had been preparing grounds for a major event in the country. We soon got to discussing business and she briefed me on the progress of the project. I asked her if the venue we always used had been informed and kept available. She assured me by responding with a rather firm ‘no problem’. I then visited the venue myself, only to find out that we were always welcome, but that the date had in fact not yet been communicated to them. I was flabbergasted with the ‘lie’ I was told by our representative. However, I then realized that our discussion had been flawed by indirect/direct communication patterns. I should have been aware of these differences and read between the lines. However, having just arrived from a rather hectic Dutch culture with very direct communication, I stepped into an obvious trap. I did not take the time to consider what ‘no problem’ really meant. She just preferred not to say ‘no’ than perhaps upset me without reason. I had been ‘KY’ as I was once jokingly told. ‘KY’ stands for Kuuki Yomenai Japanese slang literally translated as “cannot read the air” applied to the unfortunates who struggle to read social situations.

In contrast to Sri Lankans and Japanese The Dutch are very individualistic and therefore have little need for a rich social language. It is like eating and dining, like clothing and fashion. To low context speakers content is more important than form. High context speakers are more receiver focused and sensitive to giving face and building-in flexibility to avoid a loss of face. ‘Yes’ may not mean agreement, rather it often means, ‘I hear you’. ‘No’ is generally not said, merely implied. Instead, you may hear, ‘I will have to wait,’ Inshallah’, ‘Si Dios quiere’, ‘God willing’, or in the case I just described ‘no problem’.

These different communication patterns test our emotions. I was angry at the representative in Sri Lanka, while she probably only did her best to avoid loss of face. I caused insecurity and stress with my Guatemalan colleagues by not communicating ‘unnecessarily’. Kamiko felt discomfort and confusion when she would get an ‘I do not think that is a good idea’ from a Dutch colleague, or worse: subordinate. Expats from a more hierarchical and collectivistic culture might describe Dutch communication as a bit rude, perhaps disruptive. Maybe even without self-control, with people sometimes saying things that may better be left unsaid. Expats may be surprised with the lack of Dutch listening skills, the clumsiness with silences and the remarkable slowness on the uptake; ‘how can he not understand what I am trying to say?’. The Dutch, in contrast, are proud of their honesty and frankness. In their mind, integrity and respect mean saying what is on one’s mind. Also, from a business perspective it’s much more effective and efficient than trying to guess what the other person has on their mind. Those who have lived long enough in the Netherlands may chuckle and say ‘some effectiveness that is, with everybody expressing their thoughts; The Dutch seem to go around in circles, without timely and firm decisions’. But that let’s leave for another time.

Knowing and understanding low and high context communication does not just take away negative emotions like anger, insecurity or discomfort. Awareness and acceptance will help to avoid and eliminate prejudices, such as dismissing the Dutch as being blunt, or the Indian as being ineffective. A little bit of compassion may lead to appreciation of the differences and the opportunities for synergy. Words are just the beginning.